These guys pick you up in a Hummer limo. Yep. Then we took a 10min drive to the small airport from were the company operates, on the outskirts of town. Once inside, we had a short safety briefing and waited for our turn to suit up. The staff are super friendly (but also super busy) and professional and were able to give you information or allay fears about whatever you were concerned about.

The reception was covered with awesome pictures of other people’s skydives and three video screens played skydives on loop. Kinda psyches you up for the real thing! You also get to choose your picture/video package at this time. Lots of options are available: third-person video, wristcam video (more vid time of your face), pictures and any combination of the three. Or nothing. You can just skydive.

In the small hangar attached I could see three people whose sole purpose is to pack parachutes. All the time. It was quite the efficient system they had going. So efficient, in fact, that I felt like I didn’t really get a chance to soak it all in while in panic mode. We put on a bright jumpsuit, safety harness, a personal floatation belt (we jumped over Lake Taupo), cap and goggles. Helpful staff helped us put on and adjust everything within 5mins and we were introduced to our jumpmaster and video person. Albert, my jumpmaster, had thousands of jumps under his belt so I felt pretty good about that.

Because they do jumps nonstop, the planes, the pilot, the parachute folders, the jumpers – everyone basically – is ‘on’ all the time and preparing for the next thing, checking, double checking. I was expecting to get a chance to chat with the pilot and crew and ask questions here and there. Everyone one was so focussed I didn’t want to disturb them so that aspect was something very different from what I imagined. You realize that it’s still a business that’s running here, awesome as the experience may be. Nothing wrong with that, they can’t be spending hours talking to me and neglecting their jobs. 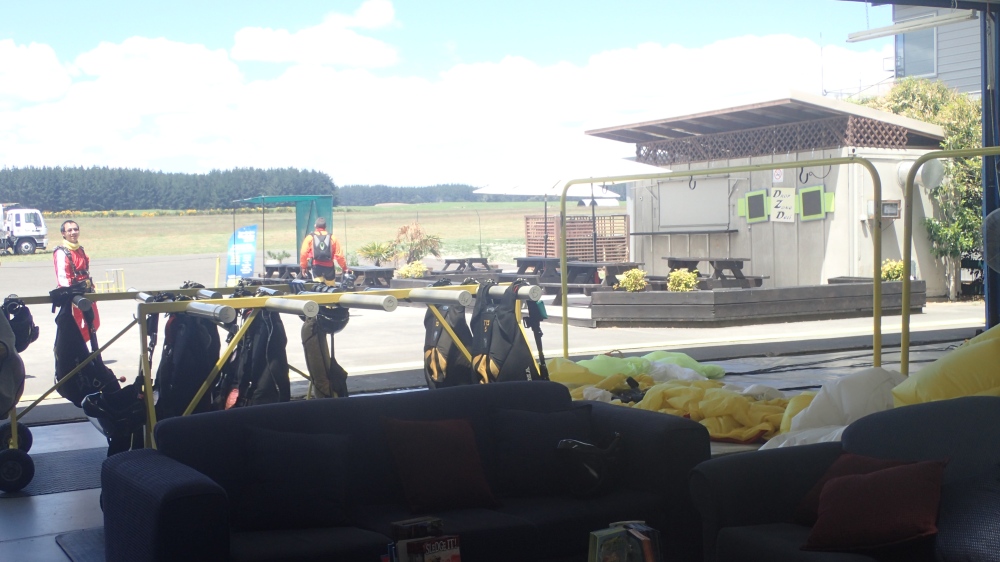 The video started with all of us in our jumpsuits in the hangar in a short interview. After a final check we walked to the small yellow airplane that was already running and waiting for us on the runway. We climbed into the plane in order of jumps, shut the door and was zooming down the runway shortly after. You can tell that the plane was custom made because of the see-through, vertical shutter door and parallel benches made for sitting with one leg on each side. Not to mention the oxygen masks!

Once we were in the air, Albert clipped us together at the harness and made sure everything was on properly. We chatted a bit and he showed me the altitude several times on the altimeter he was wearing on his wrist. I kept looking out the window, thinking ‘My God, things are getting so damn small!’ When he stuck the oxygen mask on my face, that’s when I realized, dude this is the real deal and things are getting a little scary.

Ding! We reached 15, 000ft after 10-15mins and the shutter door rolled open to the roar of air going by at some obscene speed. We shuffled along the bench to be nearer to the opening to nothingness. The first trio jumped out and the plane literally lurched as the weight shifted, causing me to skip a heartbeat. But everything returned to ‘normal’ and everyone proceeded to jump until my team was the last one remaining. Albert got me to sit on the edge with my legs dangling out of the plane, say ‘hi’ to the camera, pull my head back and tip us out of the plane, front flip style.

My first thought was, ‘We are going SOOO fast!’. I really was floored by the speed of freefall. But once we reached terminal velocity of 200km/h the feeling of awesomeness finally sank in and could think straight again. I made a conscious effort of trying to look around and take in the view as best I could knowing full well I might not ever do this again. But I didn’t get to ham it up for the camera as much as I wanted to in my state of euphoria, which I regret. All the pictures of me just show a giant silly grin.

We waved goodbye to my lovely camera man and opened the parachute. The deafening 200km wind suddenly gave way to serene silence. It was beautiful to just float for awhile and see the earth below. Well, all good things come to an end because we had to do these spin-o-ramas, round and round and round. I presume it was to direct us back to the airport to land. But I just hated the G forces created while spinning and honestly it made me nauseous. It got to a point where I could predict when we were going to spin and just took a deep breath and held it. It was all I could do. I wondered, what if I threw up on someone on the ground?

Alas, we finally neared the ground and the airport. I was told to land standing up, so one last spin and plonk, nailed it upright. Despite feeling incredibly nauseous, we took one final group scene and walked back to the hangar, where I promptly sat down on the sofa and put my head down. It would take me a good four hours to feel somewhat normal again. Other people didn’t have this problem so just bad luck on my part, I guess.

The video editor made short work of our clips, played it for us, and we were off to get our certificates and tshirts. Another ride back in our Hummer limo and that’s all folks!

I’d say that what I did was a pretty standard skydive. Safe, professional and fun. I’m glad I did it. Something to take into consideration is scenery. I had beautiful Lake Taupo as my backdrop. A friend who did his skydive in Queenstown had amazing snow-capped mountains! So choose wisely. Either way, no regrets 😉