I’m going home for the holidays and I wanted to bring my bike. Initially I thought it would be a huge hassle (and maybe it’s all relative) but after reading a few articles, watching a few Youtube videos and researching my airline baggage policies … I realized it wouldn’t be so bad. And apparently, people fly with their bikes all the time. The problem is, how do I pack my bike? I’ve found four options on the internet:

Anyway, I’ve never travelled with my bike before and I doubt I would very often nor do I have extra money to splash around for an expensive bike box. So, I opted for the cheapo cardboard box.

Initially, I thought the box was massive and too big for the airline companies. But my bike Mechanic Jeryl at The Cyclogy on Yio Chu Kang Rd. told me it was a pretty standard box. (Jeryl is awesome and honest, by the way, and his handiwork is reliable.) So I lugged it home on the bus and lo and behold, the overall measurements are within the limit. (115in limit for L + W + H. My box came in around 92in.) 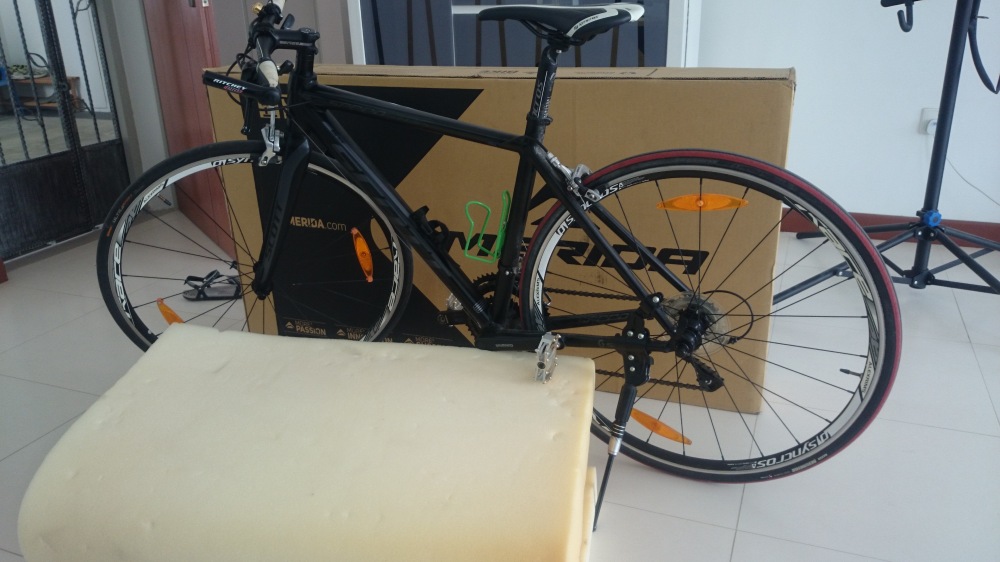 And you’re ready to go!

I was super nervous at the airport when dropping my bike off. But checking in wasn’t as troublesome as I thought it would be. The girl behind the counter knew exactly what to do and in moments someone came to take my bike away. Good, I thought, at least it didn’t go on the conveyor belt with the rest of the bags.

The most interesting thing was all the attention I got from the other passengers. People kept looking at my box and I eavesdropped on people discussing the contents.

At my stopover, however, I was shocked to see my bike going around on the conveyor belt with all the other normal luggage after waiting patiently at the oversized baggage location. I actually gasped out loud and ran over, gingerly pulling my bike off of the belt. I inspected the box for damage. None, luckily.

Nervously, sent my bike off again after checking in my next flight. In Toronto, however, it actually arrived where it’s suppose to be: oversized baggage. And in one piece. Not to shabby at all. I might actually consider travelling more often with my bike.

Here are some articles and videos I referred to when packing my bike:

From a baggage handlers point of view: http://cyclingtips.com.au/2014/06/flying-with-your-bike-tips-from-a-baggage-handler/

Good airlines to fly with a bike: http://www.sacredrides.com/blog/10-best-airlines-to-fly-with-a-bike

Perhaps I was lucky but my journey flying with my bike in tow was mostly smooth. Hopefully you’ve found this article and the links helpful.